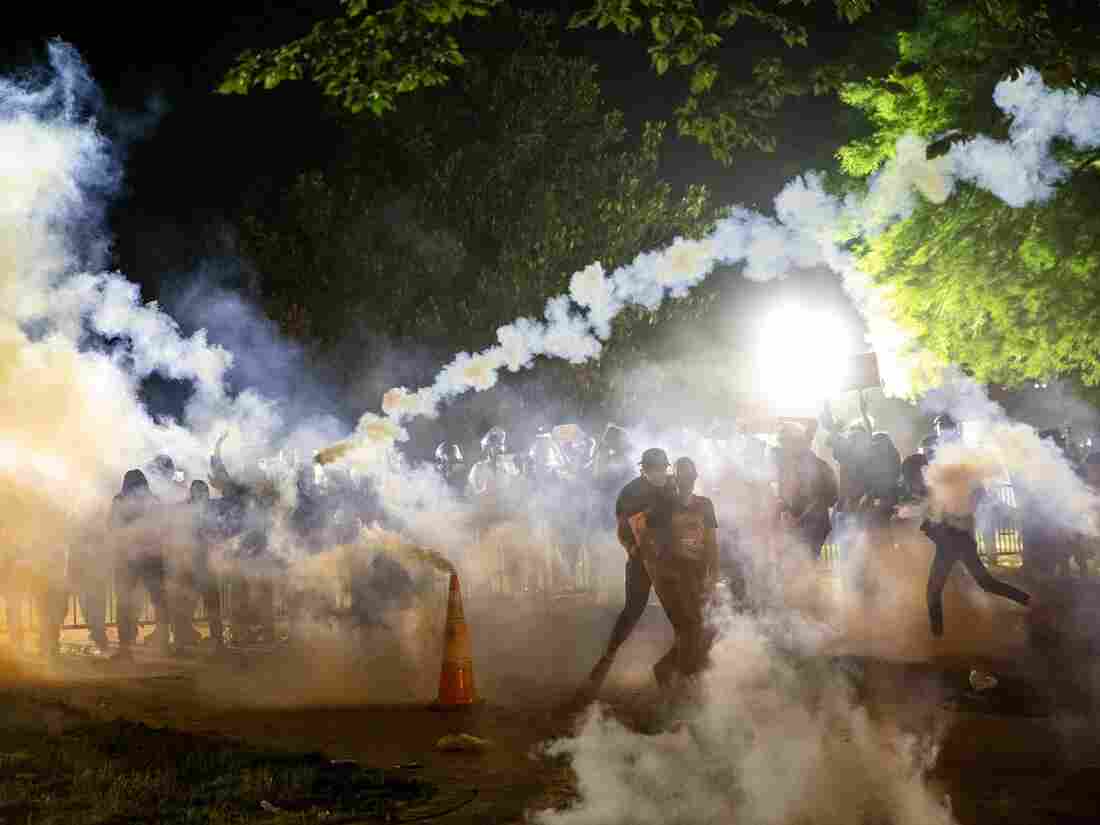 Tear gas rises as protesters face off with police during a demonstration on May 31 outside the White House over the death of George Floyd at the hands of Minneapolis Police. 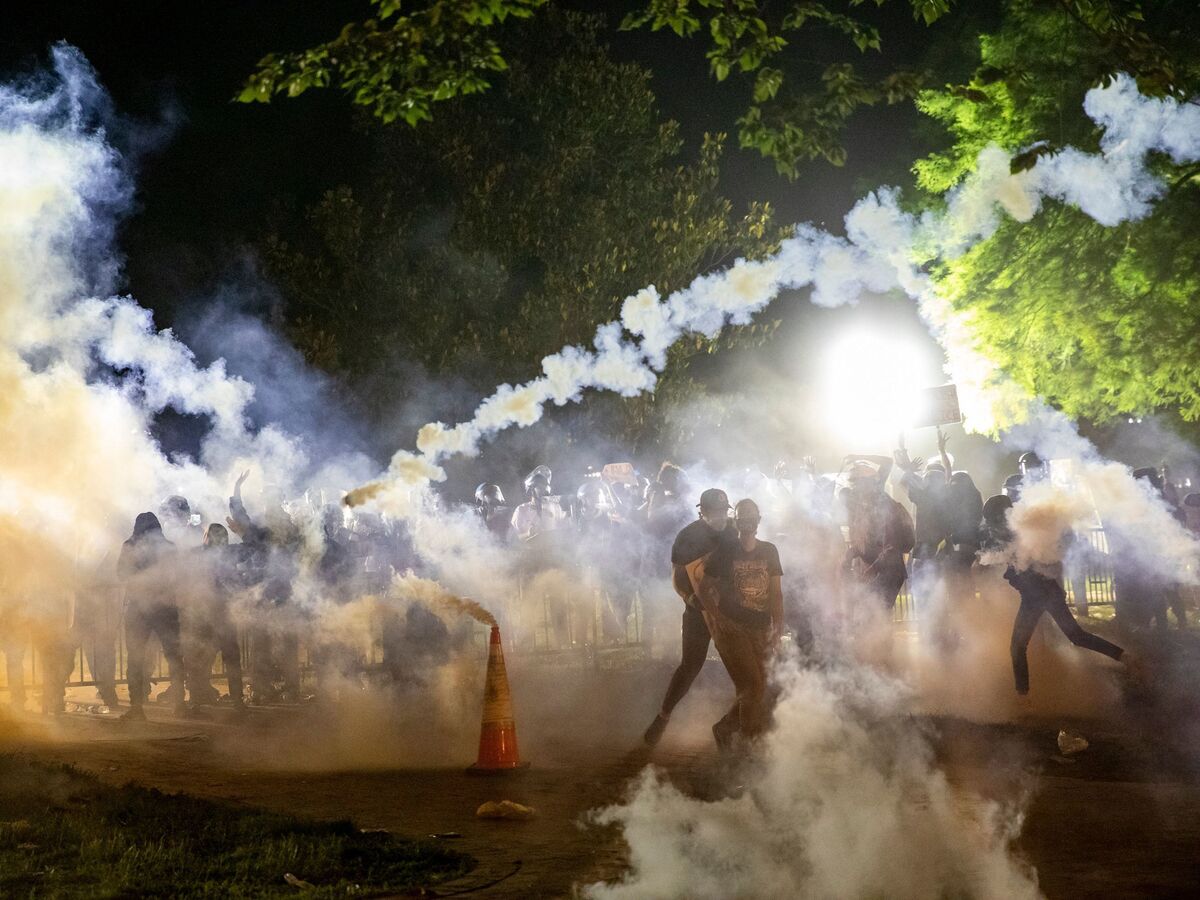 Tear gas rises as protesters face off with police during a demonstration on May 31 outside the White House over the death of George Floyd at the hands of Minneapolis Police.

In nationwide demonstrations against the police killing of George Floyd and other black Americans, protesters are frequently pepper-sprayed or enveloped in clouds of tear gas. These crowd-control weapons are rarely lethal, but in the middle of the coronavirus pandemic, there are growing calls for police to stop using these chemical irritants, because they can damage the body in ways that can spread the coronavirus and increase the severity of COVID-19.

Even before the coronavirus pandemic, some experts said additional research was needed on the risks of tear gas — an umbrella term for several chemical “riot control agents” used by law enforcement. It’s known that the chemicals can have both immediate and long-term health effects.

Their widespread use in recent weeks, while an infectious disease continues to spread across the U.S., has stunned experts and physicians. The coronavirus that causes the disease COVID-19 is highly contagious, spreads easily through the air via droplets and can lead to severe or fatal respiratory illness. Deploying these corrosive, inhalable chemicals could harm people in several ways: expose more people to the virus, compromise the body’s ability to fight off the infection, and even cause mild infections to become more severe illnesses.

“This is a recipe for disaster,” says associate professor Sven Eric Jordt, a researcher at Duke University School of Medicine who studies the effects of tear gas.

Jordt refers to these chemicals as “pain gases” because they activate certain pain-sensing nerves on the skin and in the mucous membranes of the eyes, mouth and nose.

“You have this excruciating pain, sneezing, coughing, the production of a lot of mucus that obstructs breathing,” Jordt says.

People describe a burning and stinging sensation, even a sense of asphyxiation and drowning. Sometimes it causes vomiting or allergic reactions.

The active ingredient in pepper spray, called capsaicin, is derived from chiles. It’s often sprayed from cans at close quarters or lobbed into crowds in the form of “pepper balls.”

CS gas (o‐chlorobenzylidene malononitrile) is a chlorinated, organic chemical that can induce “very strong inflammation” and “chemical injury” by burning the skin and airways when inhaled, Jordt says.

“Using it in the current situation with COVID-19 around is completely irresponsible,” he adds. “There are sufficient data proving that tear gas can increase the susceptibility to pathogens, to viruses.”

Jordt says research on the harms of tear gas has not kept up with its escalating use in the U.S and around the world in recent years. Many of the safety studies that law enforcement officials rely on date back to the 1950s and 60s, he says.

But a 2014 study from the U.S Army offers an alarming glimpse into how the chemical could escalate the pandemic. The study found that recruits who were exposed to tear gas as part of a training exercise were more likely to get sick with respiratory illnesses like the common cold and the flu.

“We have a lot of antiviral defenses that can inactivate viruses and prevent them from entering cells,” he says. “These are depleted by inhalation of tear gas and also compromised.”

The findings of the Army study led the U.S military to significantly reduce how much recruits were being exposed to the chemical.

“Even the army realized they had done something wrong and that this was more toxic than they thought before,” Jordt says.

Even though there is a limited amount of research on this new coronavirus, there are studies from China and Italy about how other irritants, such as smoking and air pollution, affect COVID-19. These studies indicate that tear gas could also make people more likely to develop severe illness, says Dr. John Balmes, a pulmonologist at the University of California, San Francisco and an expert with the American Thoracic Society.

“I actually think we could be promoting COVID-19 by tear gassing protesters,” says Balmes. “It causes injury and inflammation to the lining of the airways.”

Balmes says this period of inflammation sets back the body’s defenses, and makes it more likely that someone who already harbors the virus will become sick.

“It’s adding fuel to the fire,” says Balmes. “These exposures to tear gas would increase the risk of progression from the asymptomatic infection, to a symptomatic disease.”

Growing evidence shows many people who have the coronavirus are asymptomatic and don’t know they are infected, or are “presymptomatic” – infected with the virus and able to infect others, but not yet showing symptoms. With thousands of people jammed together at mass protests, the demonstrations are already primed to be ‘superspreading events,’ which can lead to an explosion of new cases. Outdoor gatherings typically decrease the chance of spreading the coronavirus. But activities like singing and yelling can increase the risk.

Tear gas and pepper spray can also sow confusion and panic in a crowd. People may rip off their masks and touch their faces, leading to more contamination.

Dr. Amesh Adalja, a professor at Johns Hopkins University, says the body’s reaction to the chemicals cause people to shed more of the virus.

“If they’re coughing, the particles actually emanate and are projectiles that travel about six feet or so and could land on other people,” says Adalja, who is also a spokesperson for the Infectious Diseases Society of America.

“This is a way to almost induce the virus to be expelled from people when they are exposed to these agents.”

Adalja anticipates the protests will inevitably lead to a spike in infections.

“We know that any kind of social unrest, especially in the midst of an outbreak, is only going to make things worse,” he says.

He says the most recent example would be bombings in Yemen that exacerbated a cholera outbreak.

Dr. Rohini Haar, an emergency physician in Oakland, Calif.,, has studied the use of riot control agents around the world.

“These weapons don’t actually deescalate tensions in peaceful community policing,” says Haar who is a lecturer at the University of California, Berkeley.

Haar has also been treating COVID-19 patients. She recognizes there is a danger of spreading the virus at these gatherings, but she would not discourage people from attending the protests and exercising their right to free speech.

“It’s a really tough situation,” says Haar. “I think the irony is that people are rightfully and justifiably protesting police violence and are being met with violence that is worsening the pandemic conditions we’re living under right now.”

This week, more than a thousand physicians and health care professionals signed an open letter in support of the demonstrations.

Dr. Jade Pagkas-Bather, an infectious disease expert at the University of Chicago, is one of them.

She says it will be difficult to determine whether any spike in cases were a direct result of the protests, because they’re happening at a time when many states are also allowing businesses to reopen.

“In everyday life, we weigh the risks and benefits of our actions. People who are going out to protests are clearly at a critical juncture where they are saying this state-sanctioned violence is unacceptable, and I am willing to put myself and others potentially at risk,” she says.

The open letter she signed recommends ways that protesters, police and local officials can reduce the transmission of the virus.

Among the major recommendations: police should not use tear gas or pepper spray.

The Pandemic Is Pushing Scientists…